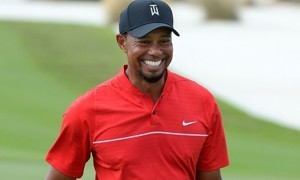 I never got to see Michaelangelo or Da Vinci paint. I never got to see Shakespeare write, or Abraham Lincoln recite the Gettysburg Address. But I did get to see Tiger Woods play golf.
Yes, I put Tiger in the same category as these other historic greats. His genius is every bit the equal of those Renaissance masters, albeit in a competitive arena. And yet, the artistry Tiger displayed at his best was just as exquisite as any artist in history.
Some people don’t like Tiger because of some of his on-course antics (swearing and slamming his club into the ground), and they have a valid point. I don’t have a problem with people who don’t like him because of this. But these same people may be depriving themselves of the joy of watching the greatest golfer of all time perform his craft. Yes, I know Jack Nicklaus has won 18 majors to Tiger’s 14, and that Sam Snead holds the record for number of victories at 82 while Tiger is stuck at 79, but I think context is important. While Nicklaus did have to fend off the likes of Trevino, Watson and Palmer – all of whom won at least six majors – Woods had to contend with multiple major winners in his own right, and he played in an era where literally anyone could win a major if he was on his game (think Rich Beem or Shaun Micheel). And Snead? Outside of Hogan, Nelson and Demaret and perhaps a handful of others, he simply didn’t face nearly the depth of competition. Combine that with Tiger’s utter dominance in so many events such as winning the Masters by 12 and the U.S. Open by 15, and you have someone who played the best golf ever played over a sustained period.
As I write this, Tiger just finished off a 69 in the first round of the Hero World Challenge. He may go on to contend and possibly win, or he might fall back into the pack near last place. But whatever the case, as John Maginnes said on his radio show, Tiger doesn’t move the needle…Tiger is the needle. And golf is better for having him back.
By Mark Harman, USGTF National Course Director
Copyright © 2022 United States Golf Teachers Federation, All Rights Reserved
200 S. Indian River Drive, Suite #206, Fort Pierce, FL 34950
772-88-USGTF or 772-595-6490 - www.usgtf.com