One of the most important things to an amputee is to find some sort of physical activity. It lifts their spirits and gives them the feeling that they can accomplish more than just being able to walk. They must find a place where they can have fun. Some have found golf. There are many associations they can join, should they seek a competitive outlet. There are numerous clinics conducted across the United States that are sponsored by the Amputee Associations. These clinics are geared towards the hospital and rehab organizations. The clinic basically introduces and demonstrates the devices that have been invented to accommodate the various amputee situations; such as arms, hands, and legs. Golf pros are invited to donate their time for one morning and give brief lessons to the handicapped attendees. When it’s over, the pros go home, and rarely (if ever), get in touch with the rehab people again. Because of the present war, the amputee population is unfortunately growing.

When working with a handicapped person, there are a lot more considerations involved when making swing corrections than with a non-handicapped golfer. After a swing correction is offered and tried by the player, you must ask how the movement affects balance. When you get that answer, you have two options; 1) continue along the lines of the correction, or 2) take another approach because of the affects on balance.

You can see this man has golf shoes on, but they do not contain his feet. That little square box where the red lines are pointing to on each leg, acts as his foot in the prosthetic device. It’s like trying to play golf on stilts. Wearing prosthetics is similar to walking across a very slippery surface. When you walk on a surface like that you use your muscles in a different way in order to keep from falling. Some muscles are tightened up, some are relaxed, and you walk with great caution. Eventually, the body adapts to the movement and muscles get realigned to work with the prosthetic. Your visional perception also changes. Try turning your head while you are walking on that slippery surface: it gets scary. So when a double amputee moves, his head goes with him.

When I first started working with this individual, his left leg was air actuated. When he swung you could actually see and hear it pull up into the body when he shifted his weight on to the leg. His right leg is computer actuated and does a thousand commands a second. The only drawback is that the computer doesn’t know when he has stopped climbing a hill or riding a bike. So he has to stop and let the computer re-boot or the leg will react as if it is still on the bike or climbing. His left leg has since been changed to be vacuum actuated. The vacuum actuated leg makes it easier for him to get his weight onto his left leg during the downswing.

Without rotors on his legs, an amputee is very limited in making any type of golf swing with a rotary motion. Usually they compensate with lateral movement and an overuse of their arms, which is where we began our lessons. After two lessons, I asked him to see if he could get rotors. In his circumstance, the VA pays for the legs, so money was not a problem. A rotor is a device that allows some pivot motion in one direction or another. The limited movement of the rotor is for balance. Rotors are about the size of a silver dollar, and about ½ inch thick. They are set equally at 15 degrees to the left and right on his left leg. The prosthetics can adjust them for more or less rotation. They are activated by twisting or turning the body. For golf, he pushes his upper body down and activates his hips to turn the rotors. When a rotor is added, the height of the foot on the prosthetic device must be narrowed. The left leg rotates in two directions. The right leg rotates 5 degrees for the backswing, allowing him to open his right hip slightly on the backswing. There is no rotor for the forward swing.

A double amputee must keep his prosthetic feet flat during the entire swing. Those little square boxes around ankle height can not tilt, because if they do, he will fall. There is no such thing as coming up on the rear toe to complete the forward swing. As we progress with downswing movement and better hip rotation, we might be able to add a rotor on the right leg for forward movement in the swing. If that rotor is added we will again address the balance issues that the rotor creates. This gets us back to: the more questions you ask a physically handicapped golfer, the better the golf lesson will be.

Stories & Activities about Athletes with Disabilities 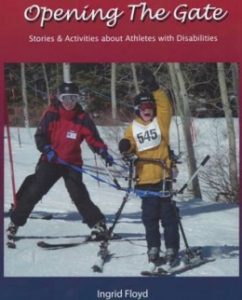