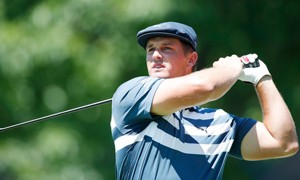 Unless you truly don’t follow professional golf at all, you know that the distances professional players are hitting the ball these days has been a major topic of conversation. The USGA and R&A are making rumblings in trying to reign in the long bombs that some of the modern players launch.
Professional golfer Bryson DeChambeau has taken his quest for distance to a new extreme, dramatically transforming his body this past offseason in gaining weight and muscle. The recent COVID-19 shutdown also helped DeChambeau in his quest as he bulked up even more. His victory recently at the Rocket Mortgage Classic was fueled by a driving distance average of over 350 yards. Traditionally, that type of distance was the domain of those on the long drive circuit, but they use 48-inch drivers, the maximum allowed. I wouldn’t bet against DeChambeau from being competitive against those guys if he too, hit a driver that long.
There is no doubt that hitting the ball farther is a great asset, as long as the golfer has the skill to pull it off. There was a long-hitting professional golfer named Victor Shwamkrug 15-20 years ago who blasted the ball far past his fellow competitors, but he did not possess the game that DeChambeau did. As long as DeChambeau can keep his tee ball reasonably in play, he stands to be a major force.
Should those of us who don’t play for a living strive to hit the ball farther, provided we have the time and energy to pursue it? Well, look at it this way. My clubhead speed, once I’m warmed up, is 94 mph. (That’s a 7 mph drop-off from my younger days, but we won’t talk about that!) The average PGA Tour pro is at 113 mph, so that’s 1.202 times faster than what I can do. We can use that figure, 1.202, as a multiplier and divisor. If I were to play a 7,200-yard course, that would be like the average tour player playing from 8,654 yards. Dividing 7,200 yards by 1.202, I would have to play at 5,990 yards to have the same experience as a tour pro. When I played professionally in the mid-1990s, I could drive the ball about 250 yards with a good strike. That was still about 20 yards behind the average guy back then, and even though I won some mini-tour events and defeated guys who later played on the PGA Tour, it was a major factor in my inability to play at a higher level.
If an average male golfer, who typically has a 90 mph swing speed, were to go up to 100 mph through training, what could he expect to score, based purely on the increase in distance? The USGA course rating formula, which says every 220-yard difference in a course is equal to one stroke, offers a key. A golfer who swings at 90 mph playing a 6,000-yard course would effectively shorten the course by approximately 600 yards if he could gain 10 mph of driver clubhead speed, which would be almost a three-shot difference.
However, most golfers have little interest in working that hard physically to gain distance. Instead, they want a quick “tip,” but it takes more than that. If they’re willing to do a complete program, including optimizing their equipment for distance, working on technique and putting in the physical training, they can indeed gain some distance, and in the end, produce lower scores.
By Mark Harman, USGTF National Course Director