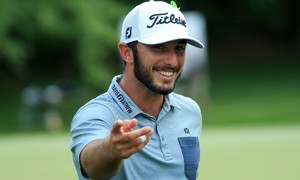 He might be better known for his Twitter feed, but make no mistake – PGA Tour player Max Homa has plenty of game. He was a first-team all-American at the University of California, winning the NCAA Division I individual championship in 2013. He was selected that year to represent the United States in the Walker Cup matches.
Turning pro later that year, Homa won his first year out on what is now the Korn Ferry Tour and earned his card to play on the PGA Tour. However, a few years of bouncing back and forth between the tours belied the early promise he held. He finally won on the PGA Tour at the 2019 Wells Fargo Championship. Since then, he has gone on to record a number of good finishes to date.
Homa has been somewhat of a Twitter sensation with his clever tweets, but recently announced he is no longer using that medium to communicate. That might be all the better to allow Homa to focus more on his game and perhaps ascend to even greater heights.