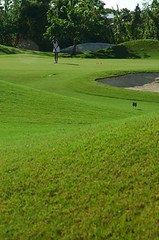 It’s no insult to today’s golf course architects – who as a group are exceptionally talented and knowledgeable in the fields of art, science, and design – to point out that for all of the technology, financing and modern earth moving equipment at their disposal, they seldom are able to match Mother Nature when it comes to crafting golfing rounds. It’s the courses on the sandy, barren, Scottish linksland that have served, directly or indirectly as the inspiration for all golf course architecture. These layouts were built by wind, water and other natural forces, while grazing sheep and burrowing animals seeking shelter gave the layouts their character and provided ready made hazards.

Still, even the most revered of these venues were improved by man. While golf has been played at St. Andrews since the 15th century, it was the imagination of golfers over several centuries that sought out routings to take the best advantage of the natural topography. And when the game advanced beyond what the site would allow, golfers didn’t hesitate to make changes. In 1764 at St. Andrews, four existing holes were combined to form two, resulting in an 18 hole course that would become the standard for the game. Later in the 1830’s, club maker and top golf professional Alan Robertson was commissioned to widen the fairways on the course and improve a green on the Road Hole – the first known putting surface to be designed by man. Bolstered by the experience, Robertson would go on to “design” other rudimentary courses in the British Isles, helping to lay the cornerstone of the golf architecture profession we know today. Robertson’s protégée’, Old Tom Morris continued the work on the St. Andrews course, and added further to the legitimacy of golf design by continuing to improve the Old Course and building the New Course at St. Andrews. Others, notably the Dunn and Park families of Mussel burgh, Scotland, began to hear the calling of course design and their work began to spread the game of golf throughout the British Isles and beyond.

It was during this expansion of the game that the practice of golf architecture truly came into its own. Faced with sites that lacked natural characteristics of the Scottish sea sides, architects were forced to do more to the land and rely less on Mother Nature. Most prominently, this transition took place in the Heathlands near London in the late 1800’s. There, course design pioneers such as Willie Park Jr., H.S. Colt and H.S. Fowler proved that, with some tree clearing, a bit of earth moving and a little imagination, inland sites could provide a satisfactory and even impressive environment for golf. Such adaptation and improvisation proved prescient, because around the same time golf was gaining popularity in the U.S. – where the landforms had little in common with the Scottish linksland. Among the earliest pioneers to build courses in North America was Scotsman Willie Davis, who laid out such seminal courses as Royal Montreal in Canada, the Newport Country Club in Rhode Island and Shinnecock Hills on Long Island. Others, mainly Scottish immigrants, were frequently contracted to construct courses, often on the estates of wealthy patrons new to the game. Beyond the few highly respected courses of the day, most of the earliest American golf architecture was rudimentary at best. In a recent book entitled “18 Stakes on a Sunday Afternoon,” golf architecture and historian Geoffrey Cornish documented the fast and furious nature by which many courses were “staked out” by Scottish transplants traveling through town. Some of these courses contained ridiculous 700 yard holes while others were just a mundane collection of greens and tees placed out on non-descript land. Even so, these rustic courses helped to spread the gospel of golf in this country. One of the figures to call for courses of greater design quality was Walter Travis, an Australian who came to this country and established himself as perhaps an amateur golfing champion, accomplished course designer and leading writer / editor on all topics golf. His work, along with a largely Scottish contingent, helped rectify the situation in the first decades of the twentieth century with scores of improved layouts.

Ironically, if there was a father of golf architecture in America, it was Canadian-born Charles Blair Macdonald. Macdonald was among the first to intensively study the greatest golf holes of Europe and adapt (not to be confused with “copy”) them to sites in America. In 1907 he penned an essay setting forth the criteria by which a golf course could be evaluated, including such factors as soil, natural terrain, and quality of turf, as well as the length and variety of holes. His methods for judging one course against another represented an early precursor to the modern infatuation with course “rankings” that today seems to color any discussion of golf architecture. The essence of Macdonald’s approach can be found at The National Golf Links on Long Island, a collection of what he considered the world’s best golf holes. Among these specimens are interpretations of such holes s the Rhedan, Sahara and the Alps. Obviously, both at The National on other courses, the natural topography necessarily altered the holes slightly, sometimes allowing for new interpretations of the great holes considered even more impressive than the originals. Some setting in America, though a far cry from Scottish linksland, proved just as ideal for golf – albeit with more effort required to prepare them. When businessman and amateur golfer George Crump saw the sandy soils and natural movement of the land in the pine forests of southern New Jersey, he made it his life’s calling to design and build a golf course there. The result, Pine Valley Golf Club, is universally acknowledged as one of the world’s greatest courses. With input from some of the world’s most accomplished architects of the day, Crump hewed out a course far different from those Scottish golfers were accustomed to. Pine Valley was one example of a new style of golf architecture that was emerging, dictated in many ways by the landforms available. In the place of open, hard, fast ground of Scotland that encouraged bump-and-run approaches came greens and fairways surrounded by trees, sand or water, many times requiring aerial approaches. Fortunately, equipment improvements at the time helped facilitate this type of shot making. And many American courses were less influenced by wind than their Scottish counterparts, again, allowing greater emphasis on higher shots. The 1920s proved to be a glamorous period for golf architecture in America – figures such as Donald Ross, A.W. Tillinghast, William Flynn, Seth Raynor and other were all active during this time. And with the national economy booming, there was increased financing available to purchase land and build courses. Still, even during this ere, architects were limited by a lack of mechanized earth moving equipment and were forced to mostly rely on the natural contours of the site. As Ross stated at the time, “God created golf holes. It is the duty of the architect to discover them.”

In the middle of the century, as prime building sites became more scarce and heavy equipment more commonplace, golf architects found themselves moving beyond largely “discovering” and improving golf holes to, in many cases, actually constructing them. Around this time, Robert Trent Jones, a golf architect and born self-promoter, brought a new consciousness of course design to the golfing public and a new stature to the profession. His innovations went beyond marketing, however. Jones was a pioneer in the design of tee boxes and other course features to accommodate various golfing abilities. “It’s easy to set up a golf hole and golf course for the professionals in this manner. But setting it up for the professional, the average club member, the senior player and the woman player at the same time is another matter,” wrote Jones in his book, Golf’s Magnificent Challenge. “Flexibility in tee placement would seem to solve the problem, but it really doesn’t. Place the bunkers for strong players and sometimes women can’t get over them on the second shots. String multiple bunkers along the fairway’s edge and the women then are playing the better men. Often there is no total solution, no way to accommodate all classes of golfers. But the conscientious architect will devote careful attention to achieving the best possible compromise.”
The American Society of Golf Course Architects offers a free brochure on “Selecting Your Golf Course Architect: Questions & Answers.” For more information on ASGCA, visit their website at www.golfdesign.org.
Patrick White assisted golf architect / historian Geoffrey Cornish with two recent books on golf architecture: “18 Stakes on a Sunday Afternoon: A chronicle of North American Golf Course Architecture,” published by Grant Books and “Classic Golf Hole Design: Using the Greatest Holes as Inspiration for Modern Courses,” published by John Wiley & Sons.
Copyright © 2022 United States Golf Teachers Federation, All Rights Reserved
200 S. Indian River Drive, Suite #206, Fort Pierce, FL 34950
772-88-USGTF or 772-595-6490 - www.usgtf.com