Teaching in A Simulator Vs. Teaching Outdoors

In addition to my duties as national course director for the USGTF, I also teach at two facilities near where I live, one outdoors at a golf course and another in an indoor simulator at a major golf store. The latter is a recent addition to my teaching, and it has been extremely illuminating seeing the contrasts to teaching on an outdoor range. If you’ve been teaching with a simulator or with a launch monitor like TrackMan or FlightScope, some of what I’m about to write won’t come as any great surprise to you. Still, it’s been interesting to see how people learn and perform in the different environments.

The launch monitor I use in the simulator is a new state-of-the-art GC Quad from Foresight Sports. It measures all the data you would expect, including ball speed, launch angle, RPMs, spin axis, direction and curve, and carry and total distance. It also measures clubhead data such as clubhead speed, angle of attack and clubhead path when you put a round metallic sticker on the top of the clubface. You can also measure additional clubhead action that includes lie angle at impact, clubface in relation to clubhead path at impact, and squareness of the strike when you position four metallic stickers on the clubface. The launch monitor and simulator aren’t cheap, and I’m grateful I didn’t have to shell out the money for them!The first thing I notice is people tend to overestimate how far they hit the ball in the “real world” of outdoor golf – one of those things I said would come as no surprise to those of you already using launch monitors. People will tell me they average 260 on the course, and yet the GC Quad is saying their total distance is 230. I use those two numbers specifically because the aver-age overestimation I’ve experienced so far is right around 30 yards.So of course, the first reaction is skepticism to the launch monitor’s numbers. I then point out that their clubhead speed of 88 mph is right about in line with a golfer who hits it 230. Of course, that 260 they got on the course came from a downwind drive on a firm fairway, but since perception is reality to most people, in their minds they hit it 260.The second thing is how disappointed people are when they learn that their clubhead path through impact is anywhere from 5° to 10° left of the target line. This won’t surprise anyone to learn a majority of golfers’ swing paths are in this direction. But these numbers are important because it gives me an advantage that I don’t have outdoors, and that is we can work toward some tangible numbers that are impossible to know precisely without a launch monitor.

The third thing I learned, even though I already knew this but not to the degree I know now, is that a ball that starts well right of the tar-get line can be produced by a swing path that is well to the left, and vice versa. When I see a ball that starts well to the right outdoors and curves even farther right, I simply cannot tell with any degree of reasonable certainty what the clubhead path did, especially if the shot came from a driver off the tee. With an iron shot, at least we have a divot that can give us a clue, but one that is often not 100 percent reliable. So having accurate club-head path data is a real benefit to the teacher.Finally, I have learned that many male golfers have a serious case of too-flat lie angles at impact, some regularly hitting shots with toe angles at 7° downwards! I have access to some clubfitting equipment featuring iron lie angles 3° upright from standard, but even with these, it’s not nearly enough to get some golfers to have flat lie angles at impact. Of course the problem is in their swings, but there’s only so much you can do during the course of one lesson.The other feature we have in the indoor simulator is two simultaneous working cameras, one for the face-on view and one for the target-line view. The video software allows me to draw the usual lines, circles, etc., and compare a student’s swing to dozens of touring pros’. With few exceptions, students’ swings change perceptibly during the course of one lesson, and I’m able to email the students their before and after comparisons.I want to be clear: It’s still possible to teach very effectively outdoors with no technology (See “No TrackMan? No Problem,” Winter 2017 edition, Golf Teaching Pro). Even with all my hi-tech tools in the simulator, I find myself working mainly on the same basic fundamentals with students that I would outdoors. But I would be less than honest if I said having some advanced technology wasn’t a great help, and it’s helped me learn some things that have improved my abilities as a teacher.As golf technology becomes less expensive and more available, I believe it’s only a matter of time before the vast majority of teachers will rely on some form to aid in their instruction programs. But without a competent teacher schooled in the art and science of golf instruction, these gadgets are virtually worthless, and in fact could prove detrimental to the golfer who doesn’t understand what’s important and what’s not. There will al-ways be a place for knowledgeable golf teaching professionals, regardless how much teaching technology may advance.
Copyright © 2020 United States Golf Teachers Federation, All Rights Reserved
200 S. Indian River Drive, Suite #206, Fort Pierce, FL 34950
772-88-USGTF or 772-595-6490 - www.usgtf.com 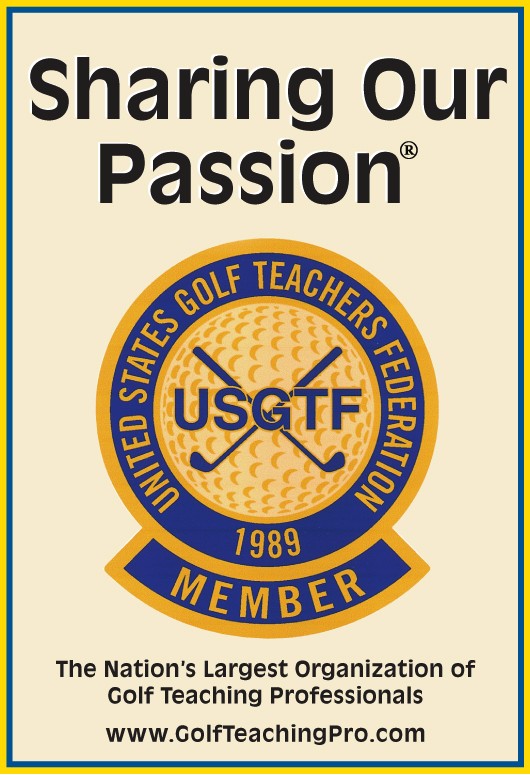