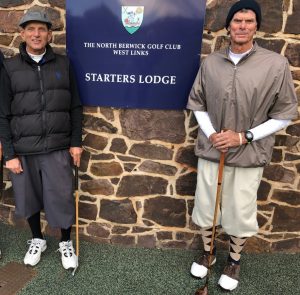 Steve Haigler, a high school teacher in Tampa, came to my six-week golf school about eight years ago. He started with the maximum handicap of 36. After completing the class, he applied all he learned and started to really improve. Today, he plays to a 22 handicap and regularly shoots in the mid to low 90s. Steve later followed in his instructor’s path and started playing with hickory golf clubs as a member of the Florida Hickory Golfers. That makes the improvement in his handicap even more significant because of the difficulty playing with clubs used 100 years ago. Steve has traveled to Scotland to participate in several World Hickory Opens at courses like Carnoustie, Gullane and Panmure, where Ben Hogan practiced for the Open Championship. He also played on the U.S. hickory team in 2018 that competed against teams from Europe and Scotland at the Old Course in Musselburgh, contributing to the U.S. victory in the matches. He has certainly taken to the game and can be seen regularly on the links at the MacDill Air Force Base golf courses.
Reason recommended by teacher: In today’s modern world of golf technology, it is unique to find someone who values the history of golf and the men who played with equipment far less forgiving than that of today. I think Steve would be the first to tell anyone how much he has enjoyed golf, especially hickory golf, and the opportunities it has afforded him for travel and meeting interesting people the world over. In addition, it is always satisfying when a student finds success and enjoyment on the golf course and knowing you had a minor hand in that journey.
Mike Stevens – USGTF Teaching Professional
Copyright © 2022 United States Golf Teachers Federation, All Rights Reserved
200 S. Indian River Drive, Suite #206, Fort Pierce, FL 34950
772-88-USGTF or 772-595-6490 - www.usgtf.com